**NOTE** Please check your Upper A-Frame Arms, Late PUMA the brackets are welded on the the A-Frame Cross Member and the bushes use M16 Bolts, this is approx 2009 onwards. Please check your Chassis Number is 9A766383 onwards.
2007 to approx 2009 either have Bolt On “Crows Feet” brackets on the A-Frame Cross Member or the brackets are welded on to the Cross Member, but use 3/4UNF Bolts, the part number you need to order for the earlier kit is SPF0128K (chassis Number is to 9A766382)
If you are unsure then you must check and measure your Upper A-Frame Bolts to see if they are 3/4 UNF (EARLY) or M16 (LATE)

These polyurethane bushes from SuperPro are the best after market bushes available for Land Rovers, “OEM” and “G” bushes just aren’t made to the same quality as original production Line Genuine bushes were when the Defender was still in production, finding quality Genuine bushes now is getting very difficult which is  why we are using SuperPro bushes as the best available alternative. 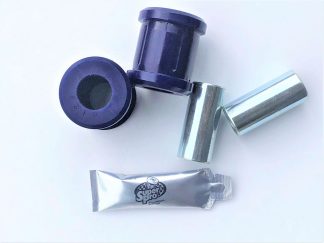