**NOTE** This kit fits 200tdi and earlier with original Narrow Bush 38mm Front Radius Arms. If you have changed your front axle to a later 24spline with Wide Bush Front Radius Arms you will need the 300tdi/early TD5 kit, Part Number :- KIT0043AK. Please see the last picture in the gallery for measurements, Early Narrow arms are 38mm wide and Later Wide arms are 44mm wide.

This is full polyurethane bush kit from SuperPro, these are the best after market bushes available for Land Rovers, “OEM” and “G” rubber bushes aren’t made to the same quality as original Production Line Genuine rubber bushes were when the Defender was still in production, finding quality Genuine bushes is getting very difficult which is  why we are using SuperPro bushes as the best available alternative.

We can also supply a bolt kit for the above bushes, Part Number :- GL1219 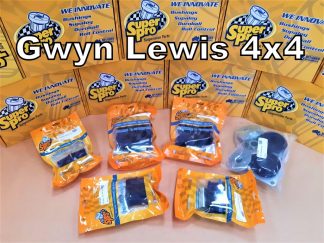